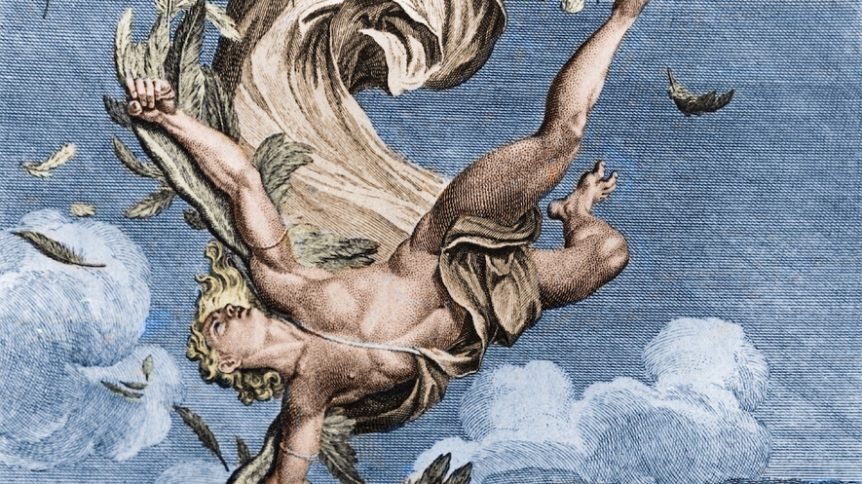 In ancient Greek mythology, it seems the one thing you never want to do is tick off the gods. If you remember, there was poor Icarus who flew too close to the sun, melting his wax wings in the process before plummeting to earth and a watery grave. There was Achilles, the bravest and most handsome warrior of them all, brought to his knees by a single arrow through his boot heel. And then there was the great King Oedipus, transformed into a blind and howling wreck when the truth of his earlier misdeeds became known. In each case, the unwitting offender appears to place himself above the gods in service of his ambition – usually with tragic and painful consequences.

The importance of hubris to the Greeks is apparent by how often it appears as the main theme running through their mythology. The word derives from the Greek word Hybris – meaning “one who has stopped listening to the gods.” The modern day equivalent of these tall tales are easy enough to find. There was General Stanley McChrystal, the brilliant commander of allied forces in Afghanistan whose outsized ego famously led to his downfall. There was the overreaching confidence of Richard “the gorilla” Fuld bringing down Lehman Brothers in 2008, and with it the entire US economy. More recently, we have seen people like Elon Musk and Elizabeth Holmes reach for the stars, and come crashing back down to earth. In the case of Holmes, the story of her company Theranos reads like a modern day Greek tragedy set in Silicon Valley.

What lessons should we draw from these and other stories? I would say the main thing is – check your ego. And it’s a fine balancing act. Because, let’s face it, you need a certain amount of ego to get anything done in the world, or to believe that your ideas have value. When I meet with new clients, it’s often one of the first things I’m looking at: how healthy is this person’s ego? Is that real confidence, or is it a brittle confidence bordering on arrogance? A haughty or egotistical manner can often point to a deep underlying insecurity, which makes them very hard to coach. A little humility and curiosity, on the other hand, are hopeful signs that they may at least be open to coaching.

Keeping the ego in check is vital if we are to keep growing as people and learning as leaders. And it’s a force that must be daily reckoned with, especially if we have had success in the past. The nature of the ego is to make us believe that we are somehow special, more talented, more deserving than others. It likes the “one up” mentality. The healthy ego says, “I am as good as, but no better than anyone else.” The unhealthy ego says, “I did this, so I must be better than anyone else.” It often brings misery in the form of unrealistic expectations and a false sense of entitlement. It also isolates you from the very people that you may need to succeed. Remember the Greek definition of hubris? “One who has stopped listening.” It’s very hard to learn when you can’t hear what’s being said.

I work with a lot of entrepreneurs, some of them very successful. And one of the commonalities I observe in those companies who are the most successful is an unwavering commitment to just doing “the work.” They are focused on their effort and on their clients, and not necessarily on outcomes, some of which they cannot control. They actively “don’t believe the hype.” And I think this is a very healthy mindset to cultivate. Even the ones who have “made it” are still trying to learn, grow, innovate and improve. They are committed to staying hungry no matter how full their bellies have become.

What are some of the ways that we can stay hungry?

Accept praise, but don’t believe it. Yes, it’s nice to receive plaudits, but don’t let that be the motivating factor. Remember, you’re probably not as good as you think you are, and probably not as bad either. You’re somewhere in the middle, and that’s okay. The minute you start believing your own hype, that’s when you know you’re in trouble.

Ask for (and listen to) honest feedback. Honest critical feedback is essential if we are to know our blind spots. A friend, a colleague, a mentor or a coach who is not afraid to give it to you straight is worth their weight in gold. As an Executive Coach, this is one of the many functions I perform, and I always admire those courageous individuals who submit to this rigorous process.

When in doubt, do the work. The answer to all success (and failure) is a recommitment to just doing the work in front of you. Remember you are mortal, and not above the gods, so you need to keep earning it. Over and over again. Like the old Zen saying: “Before enlightenment, chop wood and carry water. After enlightenment, chop wood and carry water.”