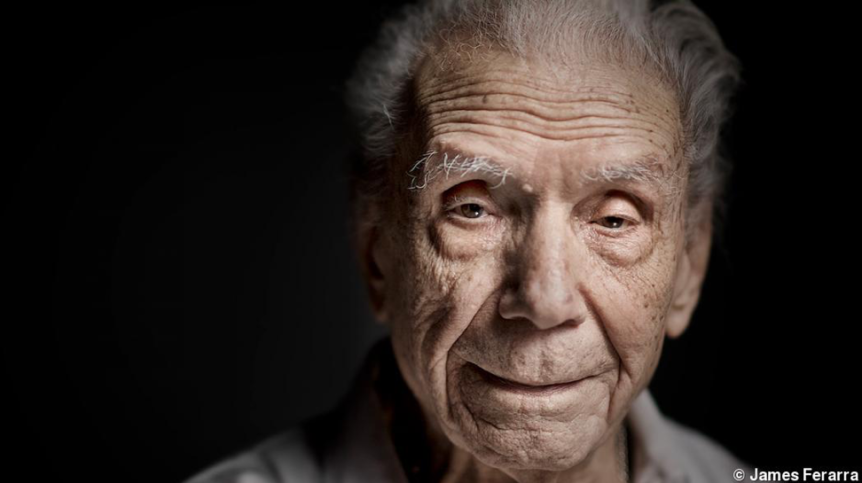 Anthony Mancinelli works a 40-hour week on his feet, trimming and shaving the heads of his incredibly devoted clients. He doesn’t call in sick; he drives himself to the barbershop in New Windsor, N.Y. every day; and then he drives himself home each night, where he cooks his own meals. He takes no regular medication, has steady hands and all his own teeth, and tells his befuddled doctor that nothing on his body aches or hurts. He is also, at 107 years old, the oldest working barber in the world. He’s been cutting hair since Warren Harding was president.

Mancinelli is used to people being surprised that he’s still working, and even still living—but he doesn’t really understand what all the fuss is about. He’s gotten this far, this long, by staying focused on the very next moment. Over the years, Mancinelli figured out that life really only happens in the moments just ahead of us.

But that’s not how it goes for most of us, is it? Sometime, perhaps around our mid-30s, we begin to think of our age as a negative attribute. The childlike joy of anticipating birthdays fades as the years climb higher and faster. We discount the lessons we’ve learned and wisdom gained along the way, and we look for ways to slow life down, hoping to wring one last hurrah before we slide into inevitable decrepitude. At least once a day, I hear some version of this: “Ann, this is a big year for me, I’m turning 58!” Or “I can’t believe I’m in my 40’s already, I thought I’d be much farther along than this!” “Can you believe I’m almost 65? This is probably my last rodeo!”

I hear a number of clients concerned about how their age may reflect a perception of their abilities or competency. They want to know if they’re too old to take on a new role. If their candidacy is viewed differently now that they’re in the second half of their lives. I often tell them, “Stick to working on the things you can control. If you don’t mind, it doesn’t matter. ”

Research shows our expectation of aging is actually way worse than aging itself. Young and middle aged people report having a lot of fear of negative outcomes such as illness, memory loss, the inability to drive, an end to sexual activity, a struggle with loneliness and depression and difficulty paying bills. But, in almost every instance, older adults report experiencing those negative outcomes at much lower levels than younger adults report worrying about them! It seems the fear of aging, is worse that aging itself.

Not only that but, as we age, even our definition of what constitutes “old” changes. Adults between 18 and 29 years old reported believing that old age begins at 60; middle-aged respondents said 70 was old; and those older than 65 said old age is something that begins around age 74!

The truth is, the negative outcomes associated with aging are much more linked to ageism, age discrimination and stereotypes about aging than to the physical, mental and emotional experiences of actually growing older. In her excellent TED Talk on aging and ageism, Ashton Applewhite says: “Negative messages about late life bombard us…I had to acknowledge it, and stop colluding. ‘Senior moment’ quips, for example. I stopped making them when it dawned on me that when I lost the car keys in high school, I didn’t call it a ‘junior moment’. I stopped blaming my sore knee on being 64. My other knee doesn’t hurt, and it’s just as old.”

Ashton reminds us, “We all worry about aspects of getting older, and those fears are real and valid. But our actual experiences of being older, positive and negative, depend largely on the cultural conditions that exist in the place we live and on our own internal attitudes about aging.” In other words, we can largely control how much we enjoy the aging process. And, yes, it is possible to enjoy aging.

Dr. Ellsworth Wareham, a 100-year-old heart surgeon who was still assisting on surgeries five years ago and still mows his lawn and drives himself around, would likely agree. “I have a philosophy,” Wareham said, explaining his approach to reducing lifestyle stress. “You do the best you can and the things you can’t do anything about, don’t give any thought to them.” He doesn’t let problems wear him down.

As for Mancinelli, the 107-year-old barber, he says there’s no magic formula to explain his longevity—which, incidentally, he says does not even run in his family. He simply puts in a satisfying day’s work each day, has never smoked and doesn’t drink much alcohol. He’s also not a fan of exercise, and he is a fan of pasta. It all sounds pretty simple, and pleasant.

He has no time for regret or worry about the future, he’s simply too busy, focused on the next head in his barber’s chair. When I read his story in the New York Times, it reminded me of Kierkegaard’s essential truth that, “Life can only be understood backwards; but it must be lived forwards.” Like Mancinelli, maybe we can live well through our latter years by keeping our focus not on the past, and not on the distant future, but on the very next moment. Doing that means not only more years in your life, but more life in your years.