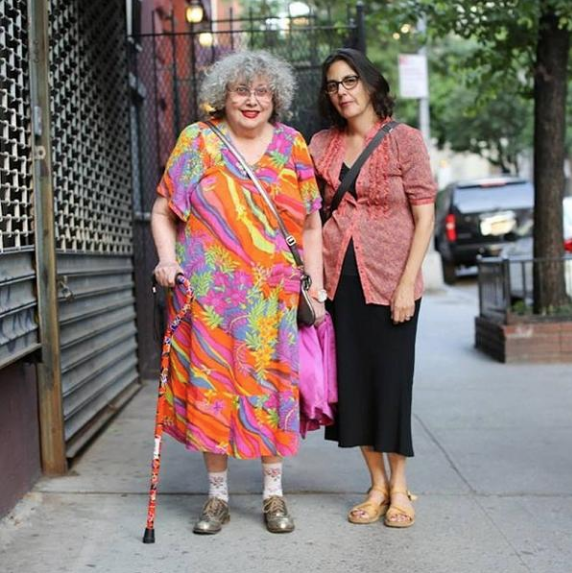 When Brandon Stanton got laid off from his financial job in 2010, he took a risk that many aspiring artists would like to take: he moved to New York to pursue his passion for photography. Stanton took to the streets with his camera, shooting portraits of random New Yorkers he encountered on his walkabouts of the city. Thus was his blog Humans of New York (HONY) born, which now (several years later) boasts a following of millions and has even spawned a New York Times bestselling book.

His method is simple. He approaches people on the street and invites them to participate in his project by having their portrait taken. He also conducts a short-form “interview,” often reduced to a single question, which captures the essence of that person, at that particular moment in time. The result is a unique portrait that is humane, witty and often very insightful.

In the photo above (of mother and daughter), this is the interview that accompanied it. “What’s your favorite thing about your mother?” “She loves life more than anyone I’ve ever known. I hope she doesn’t mind me telling you this, but recently she’s had some health problems. And her health got so bad at one point, she called me up and said: ‘I was starting to wonder if there was any reason to go on. But then I had the most delicious pear!’”

I don’t know about you, but I laughed out loud when I read that one. I couldn’t go on, and then I ate a pear! Note that Stanton does not ask their name, or where they’re from. He goes right to the heart of the matter by asking some deeply personal questions: What is your greatest struggle right now? When were you happiest? What is your greatest fear? And most people respond in kind, which gives the interview some of its intimacy and candor. It turns out that most people are happy (almost relieved) to talk with a complete stranger about some of their greatest challenges.

What is your greatest struggle?

I believe that most people are involved in some kind of personal struggle on a daily basis. And it’s different for everyone. I personally know of two couples going through separation and divorce, another struggling to conceive after years of fertility treatments, someone else undergoing chemo treatment for cancer, somebody else caring for elderly parents who can no longer care for themselves. And the list goes on. What this means for companies and managers, is that you are rarely dealing with just a single individual. That person comes with not just one, but two families: the family they live with, and their family of origin. Both of which will have a huge impact on who they are and how they show up for work. Unless you ask, you rarely can tell what people are dealing with.

Three weeks ago, my husband and I took home our second son from the hospital. He joins his 4-year old brother who was less than impressed with the new arrival. Forget those staged Instagram pictures with the cute “big brother” t-shirts and pasted on smiles. What we have is a disgruntled employee who views this new situation as “demotion” in terms of pecking order, and a new company superstar who is not just an imposter, but an existential threat! Then there is the fatigue – chronic and unending – that all newborns bring to a family. Sleepless nights, colic, navigating the tension between work and family: that is some of our struggle right now. Along with trying to find affordable health insurance for a family of four.

It’s hard to think of any meaningful life that didn’t involve some kind of crucible. In literature, it is a person’s “deep desire” that reveals character and makes them memorable and come alive on the page. Similarly in our own lives, desire seems to be the supreme animating force. And we are shaped into the people we become by how we meet our challenges.

In her famous book On Death and Dying, Elisabeth Kübler-Ross wrote: “The most beautiful people we have known are those who have known defeat, known suffering, known struggle, known loss and have found their way out of the depths. These persons have an appreciation, a sensitivity and an understanding of life that fills them with compassion, gentleness and deep loving concern. Beautiful people do not just happen.”

In my coaching practice, I frequently work with clients who are struggling in different ways, with themselves or with their companies. Because they are panicked, they want the BIG ANSWER, the inside scoop, the ultimate hack that will solve all of their company’s problems. But what they are really saying is, “Help! I am uncomfortable with this struggle, please make it stop!”

And here, I try to gently remind them that thousands, if not millions of other people, are dealing with exactly the same stuff. That their struggle is unavoidable; indeed it is a necessary precondition for any kind of growth. In a way, the struggle is what defines them.

Now, can we hold off on panic for another month or two while we work out some plan of action? Can we try to embrace our struggle – with humor and courage and grace – for the animating force that it is? Because once we do that, we transcend it. Struggle is what gives us meaning, and makes us human. It’s also what makes us beautiful.