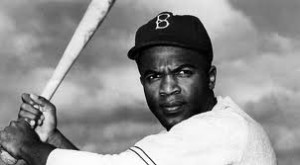 If you haven’t seen the movie “42” – I highly recommend that you do. It is the inspirational true story of how Jackie Robinson broke through Major League Baseball’s color barrier during the 1950’s. One of most powerful scenes in the movie has Robinson trying to concentrate at bat, while in the background, he is taunted mercilessly, relentlessly, by a snarling southern bigot. It takes an almost superhuman effort of will for him not to respond in the moment. And in the next scene, we see the toll on his psyche of this impossible task. It is compelling drama, and utterly devastating to watch.

Thankfully, most of us will never experience first-hand this extreme kind of provocation. But every day, the opportunity is there for us to get our chains yanked in ways that are not helpful. If you live in New York, those opportunities multiply just by walking down the street. Most people are not even aware that their buttons are being pushed, causing them to react from “old programming” well below the conscious level. Which is why we get angry meltdowns on TV, public outbursts on the subway, tossed salads and computers at work (I’ve seen both).

Whenever you are triggered, you are reacting emotionally. And very often, what you’re reacting to is not the incident itself, but something else entirely. It may be something that happened weeks, months or even years before. And it doesn’t always have to be a great trauma either. It might just be a time when you felt small, weak, stupid, ignored, excluded or abandoned. And getting your button pushed in this way takes you right back to that unpleasant feeling, causing you to lash out. But if you work with other people (and most of us do), then we need to learn coping mechanisms to help us “run cool.” With some awareness, and a little practice, you can learn to do this.

If something has bothered you in the past, chances are it’s going to bother you in the future, unless you can learn to process it differently. Take a look at what are some of the “hot button” issues for you. Write them down if necessary. We all have them, and what might make you see red may not even register as yellow for someone else. Telltale signs you’re about to get triggered include rapid heartbeat, shortness of breath, stiff neck, a sudden urge to hit something (or someone). This is the time to choose your words and actions very carefully. The first step in defusing any potential land mines is in knowing where exactly they lie, and what they look like.

The goal, insofar as it’s possible, should always be to create a “gap” between stimulus and response. As mature individuals, we always want to evaluate carefully any incoming – and then respond appropriately. The ways to do this are many. Saving your heated response to your draft folder is a big one. Never write an angry or emotional email, without letting it first sit overnight. Take a walk. Get out of the room. There are verbal stalling tactics too: “That’s interesting, tell me more about that?” You always want to be an Actor, not a Reactor. Only you decide how you will act, not somebody else. Even when someone is rude or insulting, you still have the power to choose your reaction. “Oh, that’s interesting,” you might say. “I wonder why he’s so enraged?”

Knowing what is likely to set you off, it is possible to rehearse, yes rehearse, an appropriate response to this situation. This is the secret of all skilled political operatives: talking points. They talk about what they want to talk about, regardless of the question. No matter how enticing, they simply refuse point blank to take the bait. And that takes some real practice. It can be invaluable to rehearse how you might handle a tricky question or situation. By doing so, you take all of the heat out of a hot-button issue, and respond to it coolly, even in the face of aggressive or deliberate provocation. No person (or thing) can cause you to react a certain way, because you’ve already chosen your response.

At the root of all misunderstanding are unexpressed needs, wants and desires. Most of the things that we say are bothering us, are not what is really bothering us. We just get them confused. I received training in NVC (Nonviolent communication), often referred to as “compassionate” communication. Its goal is to foster consciousness and understanding through the careful use of specific language. It’s a useful tool, and if everyone could use it, there would be no need for coaches like me. The inability to express what we are truly feeling can have heartbreaking consequences. NVC reminds us of the enormous power that words carry, and how to use them wisely.

The true legacy of Jackie Robinson extends well beyond the baseball field. He showed, as Thomas Jefferson once said how, “one man with courage makes a majority.” With his courage, self-discipline, and superb baseball skills, Jackie Robinson changed the world by small increments, paving the way for Martin Luther King and other proponents of non-violence who would follow in his wake.

Nobody, but nobody, could push his buttons – not without his consent.