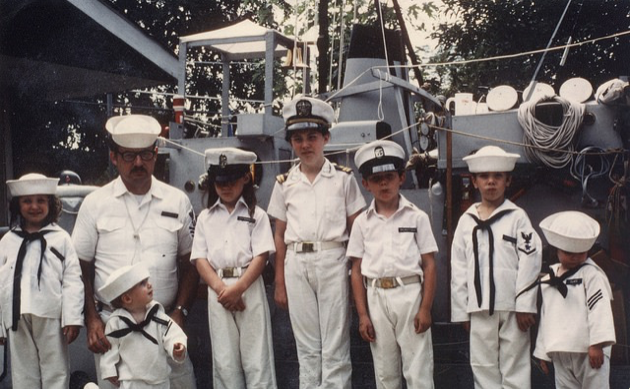 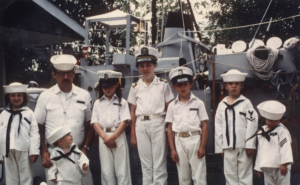 Not long ago, I found myself listening with fascination to a radio piece on NPR about a family growing up in Chicago during the 1980s. The father, Jim Steinfel, had been in the Navy as a young man. Now married with 12 children (yes, that’s right, twelve children), he invented an elaborate game in order to amuse, distract and occupy his children during the long summer months when they were out of school. All of the kids were enlisted to work on board a ship that he built for them. But this was no ordinary ship. Measuring 24 feet in length and painted battleship gray, the USS Elizabeth was made entirely out of plywood. And even though it had a rudder and an engine room, this ship never sailed. In fact, it never left their suburban back yard.

Think of what a stroke of parenting genius this is if you have a dozen kids all looking at you for something to do. On board the ship, all kids had to wear a uniform – white sailor hats, black neckerchiefs. As in the real Navy, there were rules and responsibilities too. The ship had a strict chain of command and even a mission statement: “To defend Park Ridge’s strategic Continental Divide against surprise naval attack.” And each kid had an important role to play. There was a captain of course, a gunner’s mate, a cook, a radio operator, a boson and a medic. Together, they swabbed the decks, hoisted flags, prepared food in the chow line while waiting for their “deployment” orders to come through. In order to keep their skills sharp, they ran practice drills: a surprise attack, man overboard, storm coming, etc.

As I listened to this beautiful story, I was struck by a couple of things. First and foremost, is the love and affection this father must have had for his children in order to spend the necessary time on this elaborate fiction. The second thing that struck me was the sheer level of detail that went into creating this rich fantasy world – no detail too small to be overlooked. A blender mounted to a wall provided the necessary “engine noise.” The life vests and flags were all real, bought from an army-navy store. A working intercom connected the various compartments. An actual captain’s log from the U.S. Navy recorded all of the ship’s activities.

So what was this father up to? Well, I’m guessing that the overwhelming demand of parenting 12 children required an enormous act of ingenuity in order to safely occupy them. But more than that, I think he wanted to teach his kids how to be disciplined, competent and industrious citizens. He wanted them to be imaginative, and to serve something bigger than just themselves. He wanted them to know the joy of camaraderie, the value of teamwork, the importance of getting the smaller details right. In effect, he wanted them to know that each job on board the ship, no matter how mundane or seemingly unimportant, had intrinsic value.

And I think we want the exact same thing as adults. We want to know that our work is valued and that our role is important. We want to believe that there is meaning in mundane chores performed over and over again. We want to know that we serve some larger purpose. But it becomes much harder once we reach adulthood and enter into the “real” world. A project that we worked on for many years eventually comes to naught, and worse, nobody even notices or cares. A solution that you came up with is met with casual indifference, until somebody else takes credit for it. These are everyday occurrences as an adult, and can be deeply demoralizing.

Jim Steinfel died in 2011. It was interesting to hear his children, now fully grown, talking about how their experiences on board the USS Elizabeth had shaped them as adults. Turns out their father wasn’t just reliving his glory days in the navy, he was carefully preparing them for theirs. It was here that they learned about work ethic and discipline and teamwork. For most of them, the ship began to lose some of its magic by the time they reached puberty. One by one, they would each request a “formal discharge” and go off to pursue other interests. But while they may have left the ship behind, the ship did not leave them. Not surprisingly, four of the children went on to join the Marine Corps. One of them even remarking how life on an actual ship was “not too different” from life onboard the USS Elizabeth!

Whether telling a story, starting a business or imagining a naval vessel into existence – it’s the level of detail that will ultimately determine its success or failure. Our job is not to worry about whether the ship can sail, but to focus on doing our part, and getting the details right. That’s why we need make believe. That’s why we need magic. It teaches us how to live.